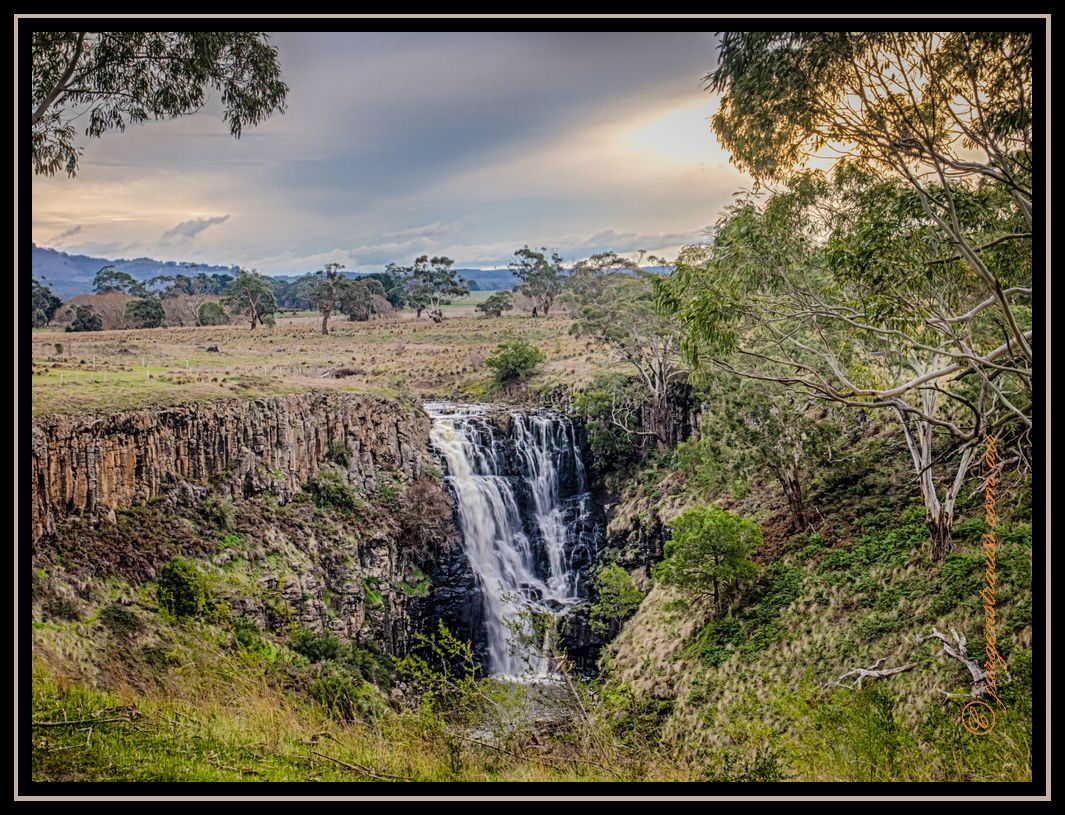 Lal Lal Falls (the name means "dashing of waters") are on Lal Lal Creek, a tributary of the Moorabool River, west branch. They are about 35 m in height and at the time of year of this photograph (mid August) generally carry quite a bit of water.

Lal Lal Falls is of substantial indigenous significance. Not just to the local Tooloora Baluk clan of the Wathaurong people, but to all the peoples of the Kulin Nation which extends across most of central Victoria. It is here, at Lal Lal Falls they believe that Bunjil, the eagle creator spirit of their people made his home, creating the falls as a place to live before being blown with his family into the sky. From there, he watches over his people and the light from his fire illuminates the planet Jupiter which they call Bunjil.

The township of Lal Lal was originally part of an extensive sheep run established in 1845 but later formed around the discovery and mining of iron ore, lignite, kaolin (clay) and to a lesser degree, gold. The opening of the Lal Lal railway in 1862 cemented the township as an important mining location and site for transportation of minerals.

The town grew with people mostly associated with the local mining industries and with it came development, hotels and a favourite pastime of the era, horseracing.

Lal Lal became a popular tourist destination because of the Falls and its country racing program. The New Years Day Race Meeting drew crowds from far and wide with visitors flocking to the event by steam train. A special train line was built to link the railway station with the race course.

Artists and photographers were also drawn to the views; most famous known paintings of the falls are by Eugene von Guerard (1850's) and Fred Williams (1979)

The races continued until the Second World War and held the record for the highest attendance at a country race meeting (32,000 people, 1937).

As the mining diminished so did Lal Lal, gradually returning to its former rural role.

About the photography - Olympus Pen EP-3, using an Olympus M.Zuiko Digital ED 14-42mm f3.5-5.6 lens set at 41mm (35mm eq. of 82mm) with Exposure Time of 1/13 sec to have the water movement captured on the photo. Exposure bracketing at + and - 2 EV used to combine three images for an HDR photo. Pending storm clouds add a striking and somewhat threatening look to the sky.